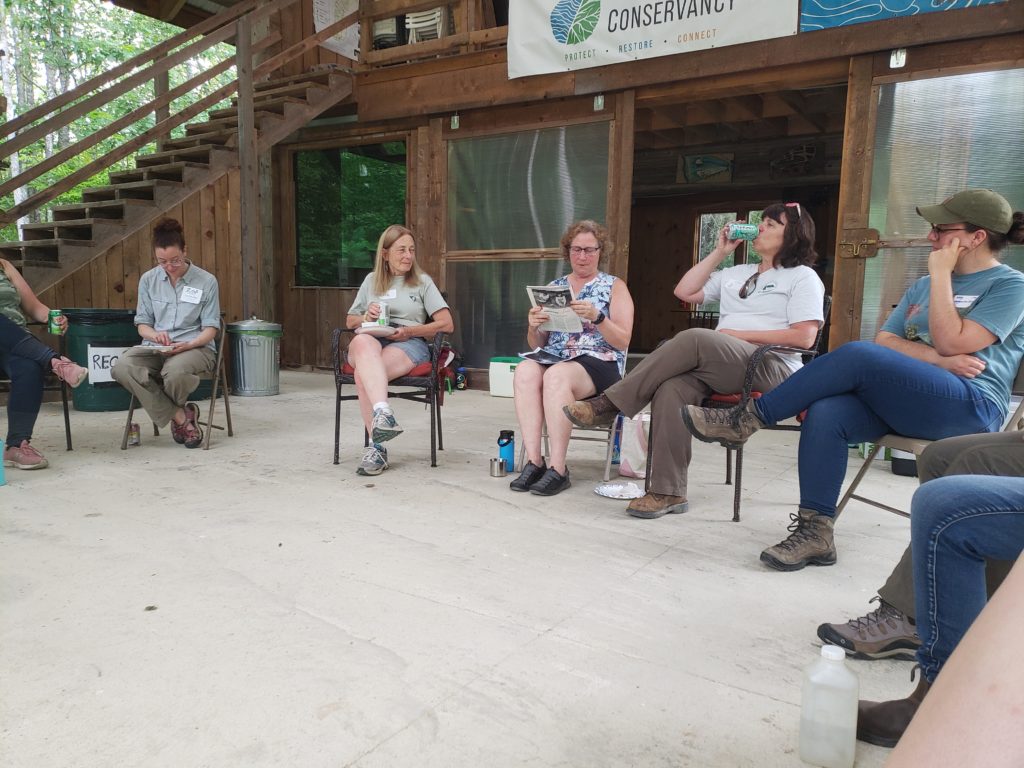 On July 1st, 2022, we gathered at HVNC. Participants traveled to their cabins and tent sites, spread throughout the many acres of HVNC, to deposit their gear then gathered up under the towering ceiling of the Barn, an outdoor learning structure. Nearly 40 of us sat in a circle of metal chairs, benches, and camp chairs, each with our own story of accomplishments and challenges, hopes, and dreams. We shared who we were, where we came from, what we do, and honored the people who have supported us. The same student who Lynn had spoken to, now working as a forester, was at the event. We found that several of us shared the same mentors or connections to places in New England. We shared laughs and learned names, adding new connections to our ever-growing forest network.

Patty Cormier, the second female Director of the Maine Forest Service, read an article from the 1950’s titled “Foresters, Fair.” The article ostensibly celebrated the 28 women who had entered the forestry field since 1915, including 16 who were employed at the time. The article found creative ways to describe these women, including “girls,” “pistillate foresters,” “rouge-and-lipstick foresters,” “no mere spectator,” “powder-puff forester,” and “special student.” With each new term, cringes and laughter were evoked. Cries of “Look how far we have come!” mingled with serious discussion of needs that continue today. Signified by the fact that we were gathered, there are still some ceilings to shatter and needs for growth for women in forestry. 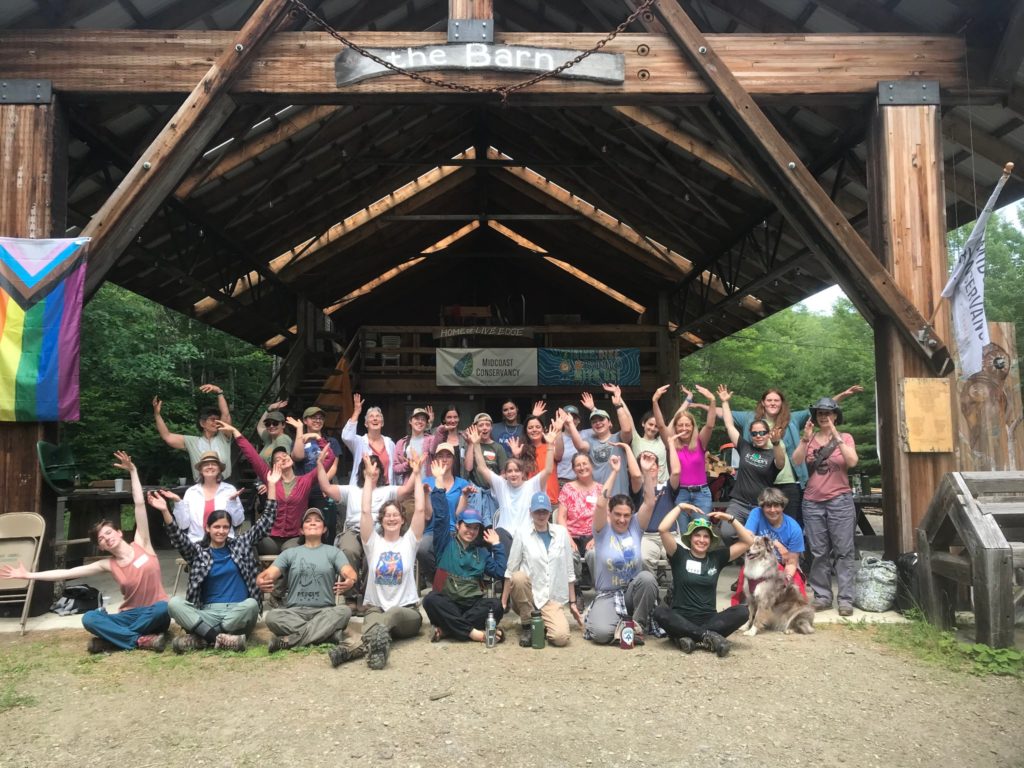 As nighttime fell, the pond came alive with frog calls and an owl repeatedly hooted out into the darkness. From under the Barn came the light sounds of acoustic music and song, of laughter and quiet conversations. While some delved into their music, others gathered round to solve riddles and share stories of their first and more recent encounters with moose and bears. Slowly the group grew smaller as women left to find their distant tents and cabins until the fire died out and the string of lights were finally shut off.

Bonded by our shared experiences as women in forestry, we must also acknowledge the strength that comes from intersectionality, listening to the voices, needs, and accomplishments of other communities. We were privileged to be joined by tish carr, ED of Wabanaki Youth in Science (WaYS) and a national leader in women’s chainsaw trainings, and Keyana Pardilla, a marine biologist and Tribal member of the Penobscot Nation and Passamaquoddy Tribe. Keyana and tish discussed their work with WaYS, breaking down barriers for Native American youth in the education system. We live in a heavily westernized culture, where the knowledge and experiences of Native Youth are often ignored. The WaYS program helps Wabanaki youth connect what they are learning in school to the knowledge that is held in their community through mentorship from Tribal Cultural Knowledge Sharers and western scientists. 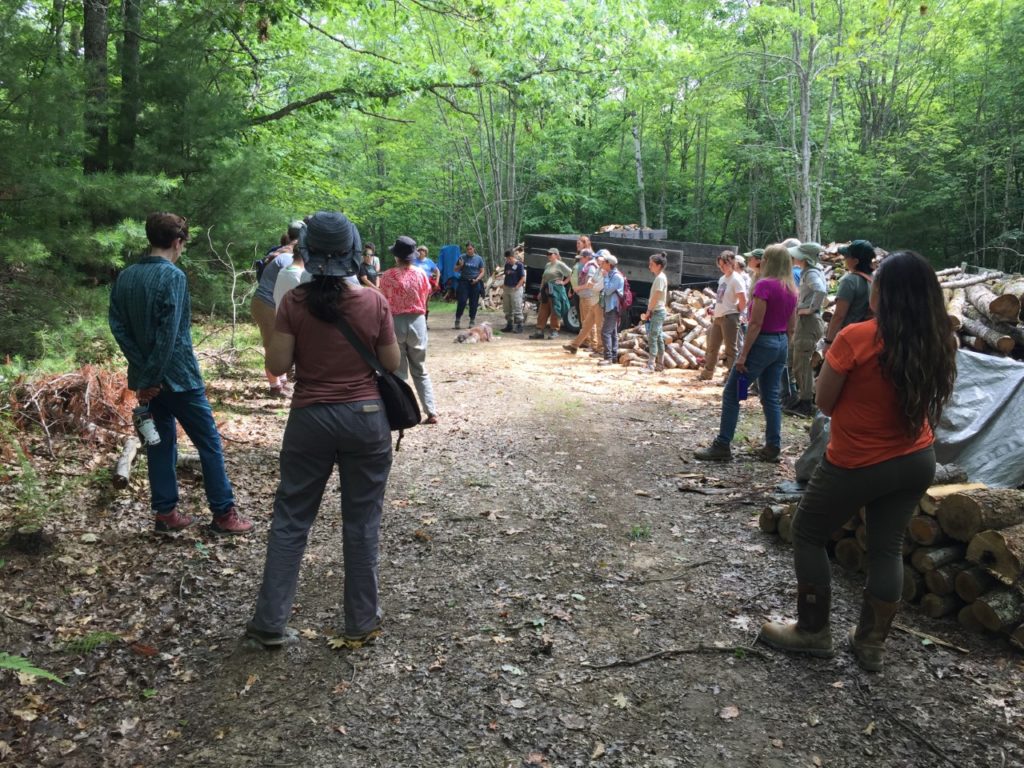 We set off down a forested trail as Barrie Brusila, a consulting forester who has managed the land at HVNC for several decades, shared some of her work in the woods while tish and Keyana shared their insight into non-western ways of seeing and being a part of the forest. In between stops where we came together for conversation on silviculture, trail construction, and world views, we learned from and about each other. The power of meeting on a forest owned and managed by women was not lost on the group. Throughout it all, we watched out for each other, picking ticks off people we’d met the day before.

Generous amounts of time between the structured events allowed us to learn about one another, discuss new ideas, replenish with snacks, and do what the founders envisioned when starting the Women Foresters Collaborative – connect.

A previous version of this article stated that Patty Cormier was the first female director of the Maine Forest Service, a title that actually belongs to Susan Bell. This article was corrected and updated from its original writing on November 3, 2022.