The weather has changed in the Southeast to sunny, crisp, and cool. The perfect time of year to get out in the forest and look at some trees…. easily done while social distancing!

While out doing field work near Sparta, Tennessee, Jen Chandler and Dakota Wagner came across several beautiful shortleaf stands at the Bridgestone-Firestone Centennial Wilderness Wildlife Management Area. Did you know that shortleaf pine (Pinus echinata) has the widest range of any southern pine species in the Southeast? It is a fire-adapted species that grows best in savanna or woodland forest structures. Shortleaf pine ecosystems have a robust resiliency to disturbances, provide important habitat for wildlife such as game species and songbirds, and are adapted to survive in conditions of drought. Shortleaf pine currently occupies less than ten percent of its historic range, with 70 to 80 percent reduction in Tennessee and Kentucky alone. 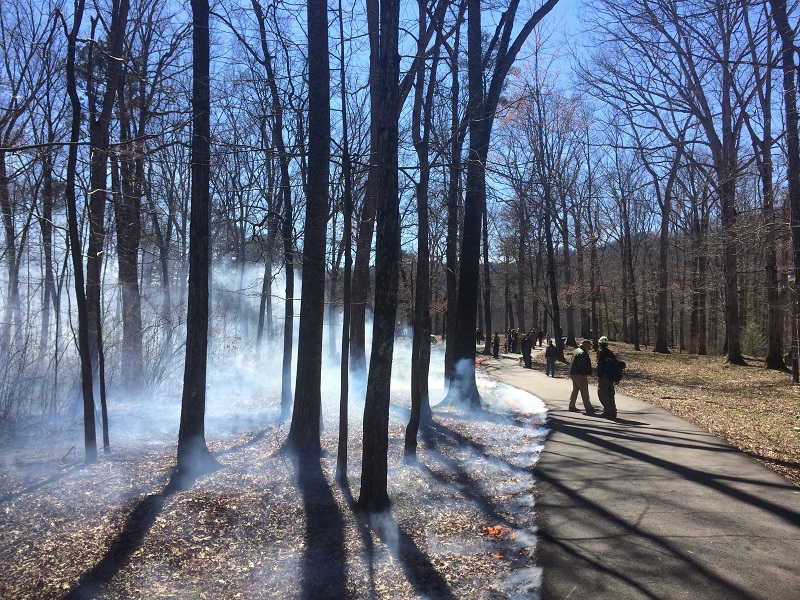 Implementing a prescribed fire at a learn-and-burn at Berea College Forest in Fall 2019.

Partnering with the National Fish and Wildlife Foundation, the Guild has been promoting shortleaf pine habitat restoration on the Cumberland Plateau of Tennessee and Kentucky since the Fall of 2019. Our partnerships continue as we build on the work completed thus far: hosting learn-and-burns and other educational events for landowners and practitioners, implementing prescribed burns, and more. Now, the Guild is working with Tennessee Wildlife Resources Agency (TWRA) to produce a shortleaf pine restoration plan for their Bridgestone-Firestone Centennial Wilderness WMA. Excited by TWRA’s enthusiasm for wildlife habitat enhancement, particularly for Northern Bobwhite Quail, the Guild hopes to aid in the continuation of their great work. The restoration plan will incorporate activities such as ongoing implementation of prescribed fire on the WMA. Shortleaf pine is dependent on fire to reduce competition from encroaching hardwoods and other vegetation, so when land managers promote frequent fire through stands with shortleaf, the habitat suitability for quail and other wildlife is positively impacted.

Additionally, to help both landowners and practitioners achieve shortleaf restoration goals on property they own, manage, or care for a Shortleaf Pine Restoration Toolkit is in the works. The Guild hopes to couple this toolkit with a socially distant, guided forest walk at Berea College Forest in Kentucky later this fall.