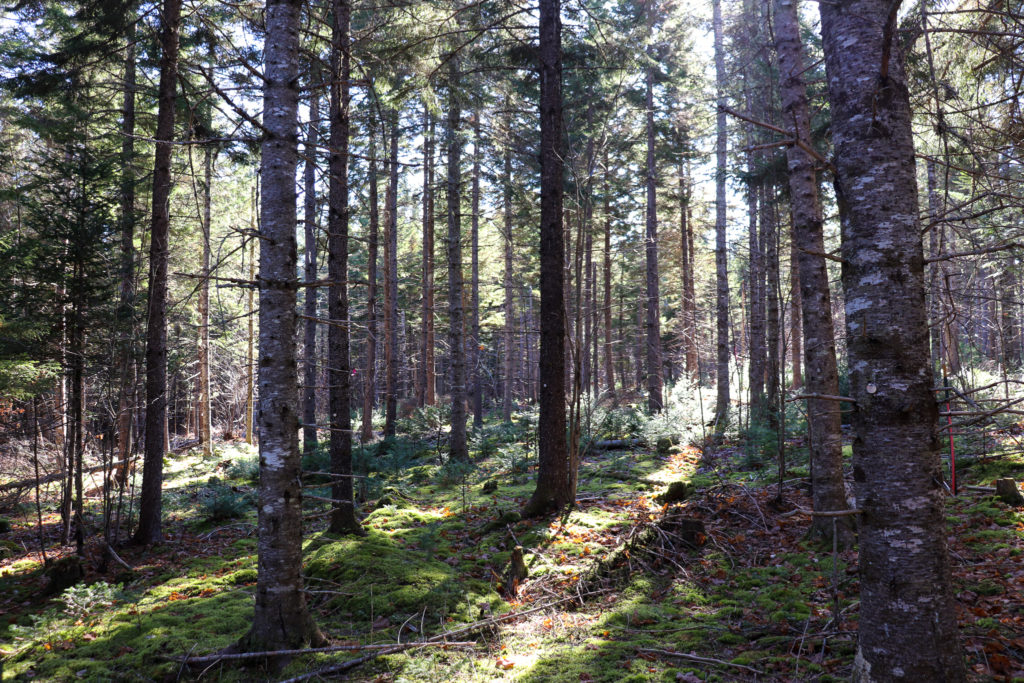 Written by Logan Johnson and Maddie Eberly of the Forest Stewards Guild, and Meg Fergusson of University of Maine’s Center for Research on Sustainable Forests.

Since 2020, the University of Maine’s Forest Climate Change Initiative (FCCI) has collaborated with the Forest Stewards Guild to address Climate Change impacts in Maine’s forests. They began with a Science and Practice forum in Orono in February 2020, where forest scientists and managers gathered to identify the highest priority concerns around climate change in Maine’s forests.

In the Fall of 2020, the FCCI and Guild kicked off a monthly webinar series to catalyze scientist-manager discussions about climate change research, grow Maine’s forest climate adaptation community of practice, and be a resource for the Maine Climate Council about Maine’s forests and climate change. The first season of the Forest Climate Change Science & Practice series featured nine lunch-hour webinars that spanned topics from carbon budgets to forest biodiversity and species shifts.

Season 2 of the Forest Climate Change Science & Practice took a new approach – coupling lunch hour webinars with follow up field tours. This new hybrid model provided the ideal balance between information sharing and in-depth discussions in the field, with each session focused on a specific forest type in Maine. 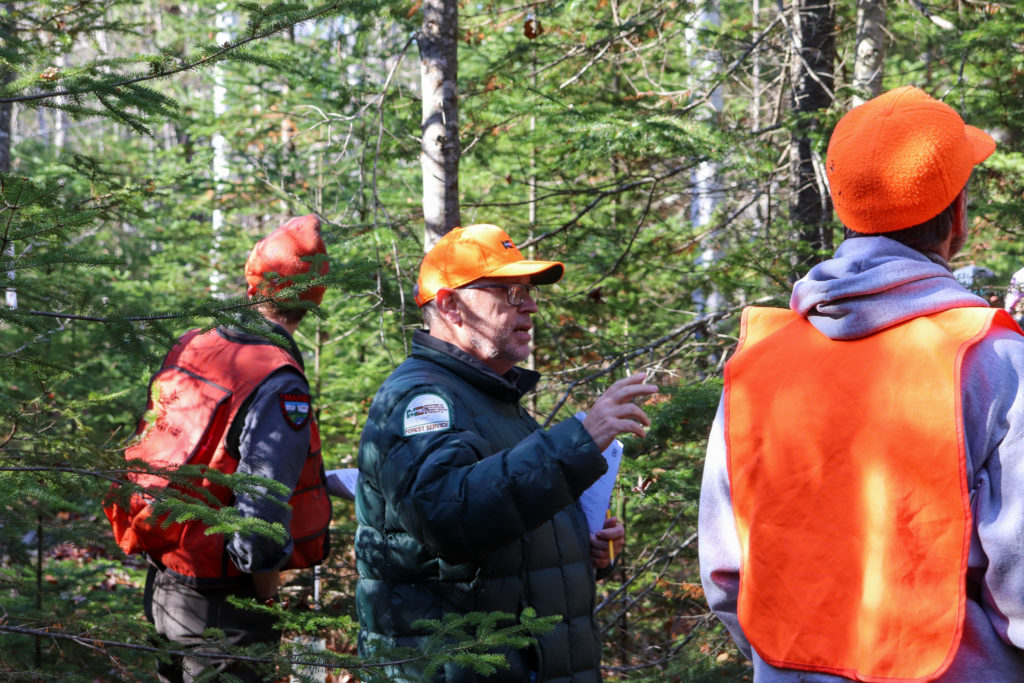 During the webinar, participants learned about the decades of research at the PEF. Discussions in the field focused on how different management techniques lead to vastly different results in the woods. The first stop on the tour looked at selection cutting and commercial clearcut, and the discussion focused on how viable each method would be for landowners. At stop two, presenters and participants compared a shelterwood without thinning and with thinning. Here, discussion focused on future forest stand development and what conditions make a forest more resilient to climate change and enhance carbon storage. The tour’s final stop visited a strip clear cut focusing on operations and how adaptability is key to changing winter conditions. 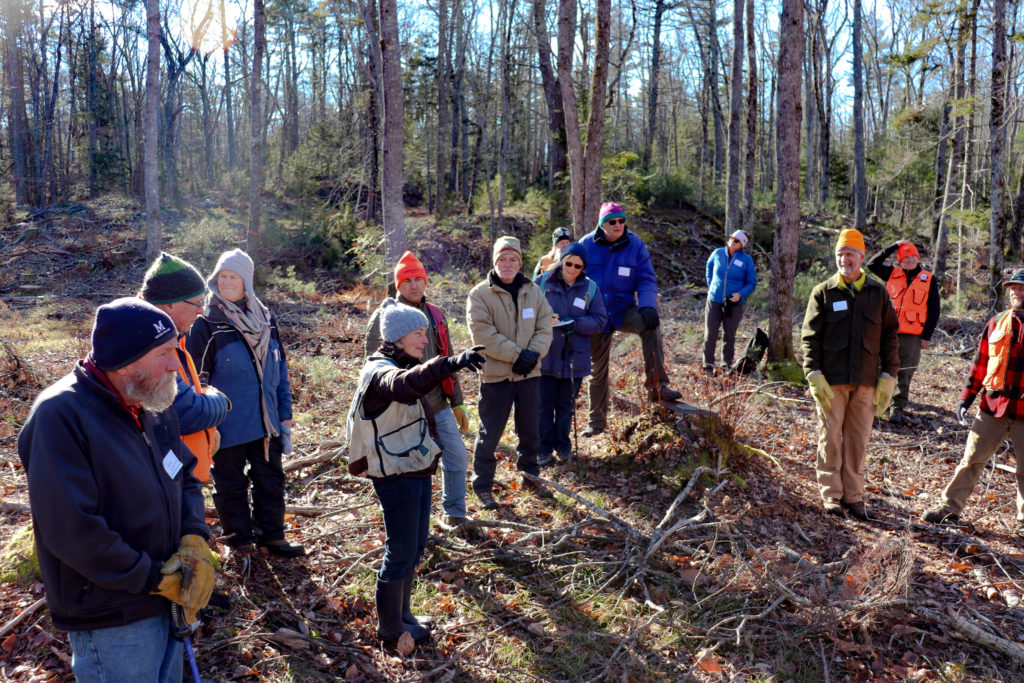 Oak-pine at the Holt Research Forest

The webinar featured key findings during the nearly 40-years of continuous monitoring. Findings include the loss of hardwood regeneration due to increased deer browse and oak regeneration patterns linked to masting years. Additionally, the forest experienced shifts in small mammal species, highlighted by the shift from predominantly Northern flying squirrels (Glaucomys sabrinus) to Southern flying squirrels (Glaucomys volans) in the early 2000s.

The field tour took participants on a loop around the recently harvested research grid. It included stops at unharvested control areas, canopy gaps created during the harvest, a stream crossing location, and a recently installed deer exclosure. The discussions ranged from the effects of deer herbivory on regeneration to the importance of microclimates and climate-adapted plantings. 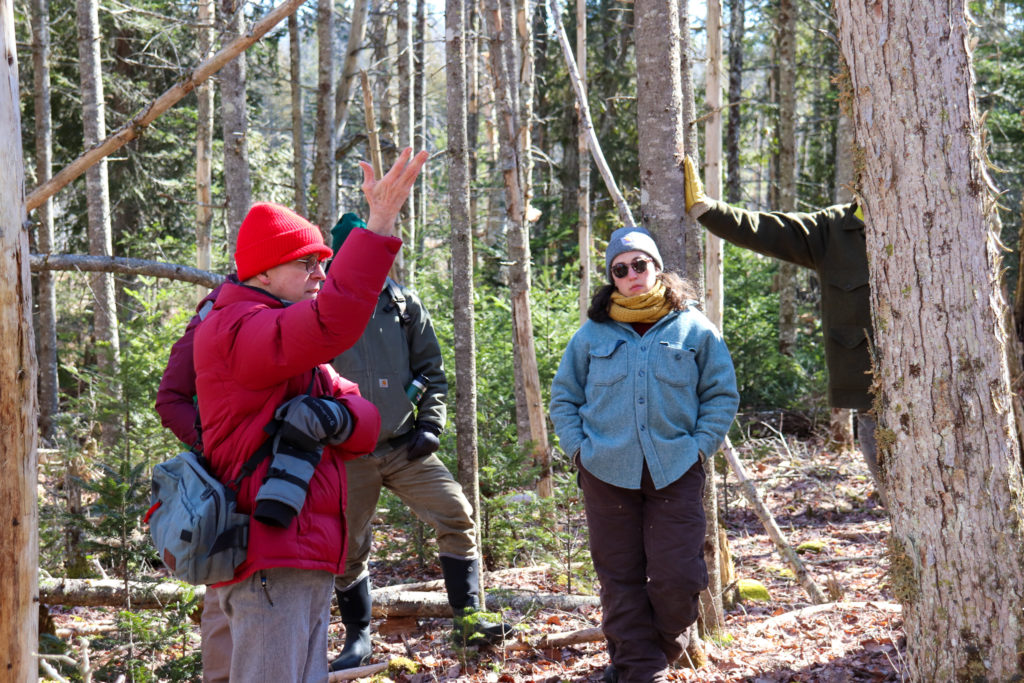 Spruce-fir (coastal) at the Schoodic Peninsula

Online, the virtual session highlighted Nelson’s work using remote sensing to monitor forest health and wildlife connectivity on the peninsula. In the field, DeForrest led the group along trails of the Forbes Pond Preserve, a Maine Coast Heritage Trust property on the peninsula, where conversations ranged from silviculture and recreation management to the value of ecological features such as lichen and coarse woody material. After visiting the Preserve, the group made their way to Frazer Point in Acadia National Park, where Fisichelli described the peninsula’s recent history and forest practices. The group then walked through an older spruce-fir forest where the park recently constructed a bike path to increase recreational opportunities. 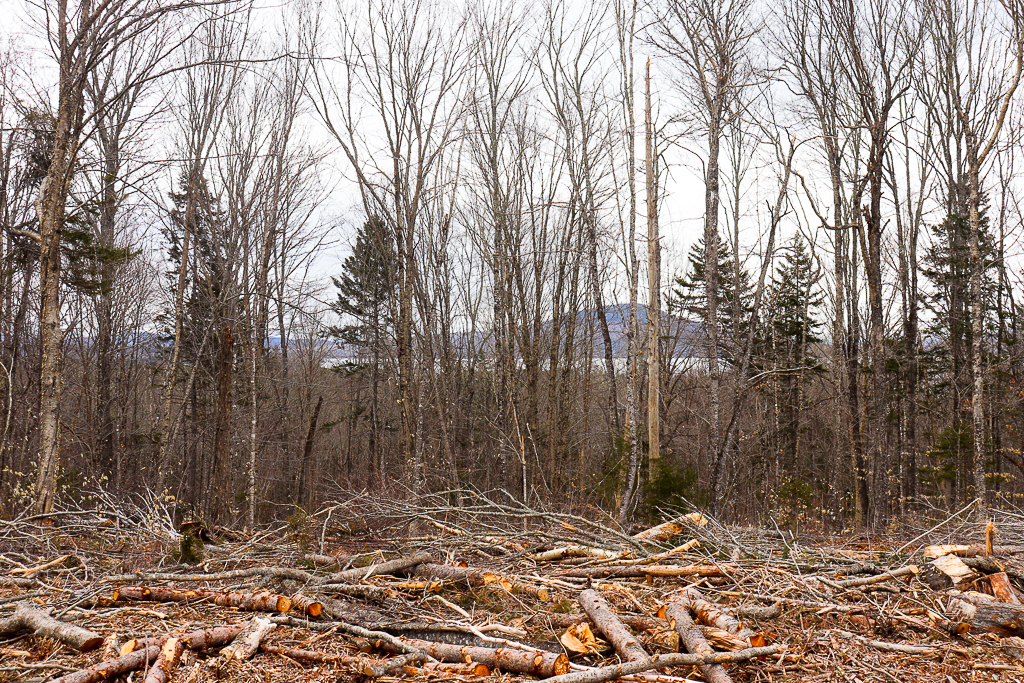 To set the stage for the field tour and highlight the partnerships, the webinar emphasized a landscape-level perspective of forest management and conservation in the region before focusing on hardwood management in a changing climate.

During the final field tour, participants visited the Stephen Phillips Memorial Trust Preserve, managed by the Seven Islands Land Company (who also provides forest management services for RLHT) and under a conservation easement held by RLHT. The Preserve hosts varying stages of hardwood forest development, including recently harvested areas and areas where harvesting hasn’t recently occurred. This property provided a strong example of uneven-aged forest management in hardwood systems. Where harvesting hasn’t taken place recently, discussions focused on managing for diversity and carbon. When visiting the site where harvesting occurred over the winter, conversations shifted to the importance of having a skilled workforce, which was apparent when reviewing the expertly tended stand. 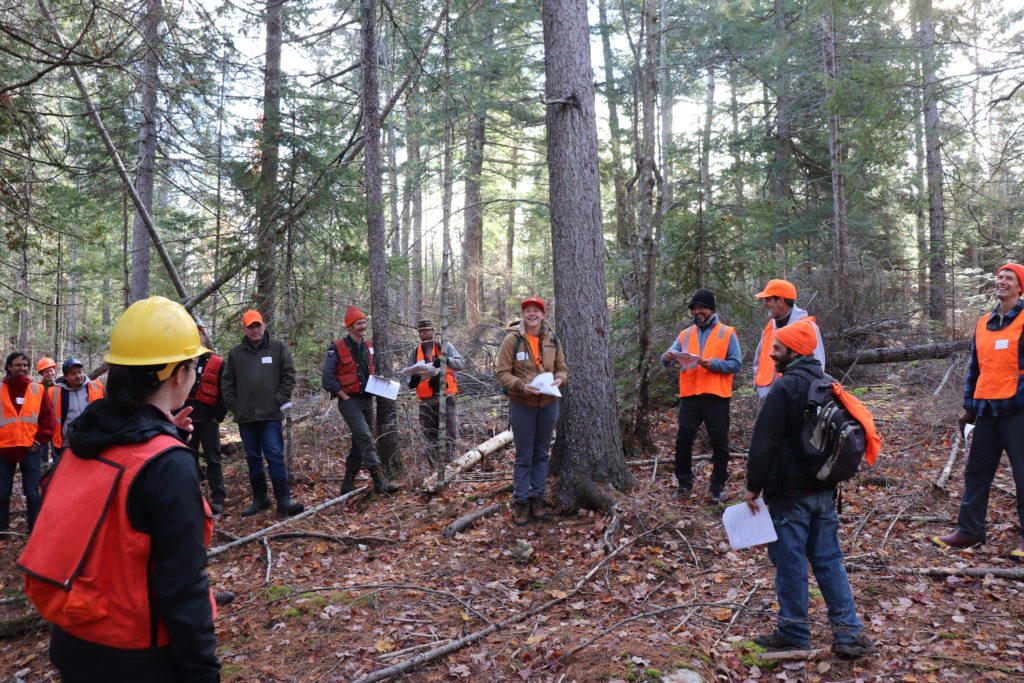 Building a Community of Practice

Each session provided an opportunity to build the climate change community of practice that convened for the first time at the Science and Practice Forum in 2020. The virtual format adopted at the beginning of the COVID-19 pandemic continued to provide a platform for addressing the science and practice of climate change-related impacts to professionals from every corner of the state. The addition of field tours created a new avenue to develop the community with opportunities for in-depth discussions about the challenges managers face in the woods. The field tours also provided a vehicle for informal conversations and connections while traveling to field sites, and of course, over lunch with friends in the field.

The varying backgrounds of the participants amplified the benefits of these connections during each session. From government agencies at the federal and state level to conservation nonprofits and land management companies, everyone on the field tours played the role of teacher and student, bringing their unique perspectives to the conversation. 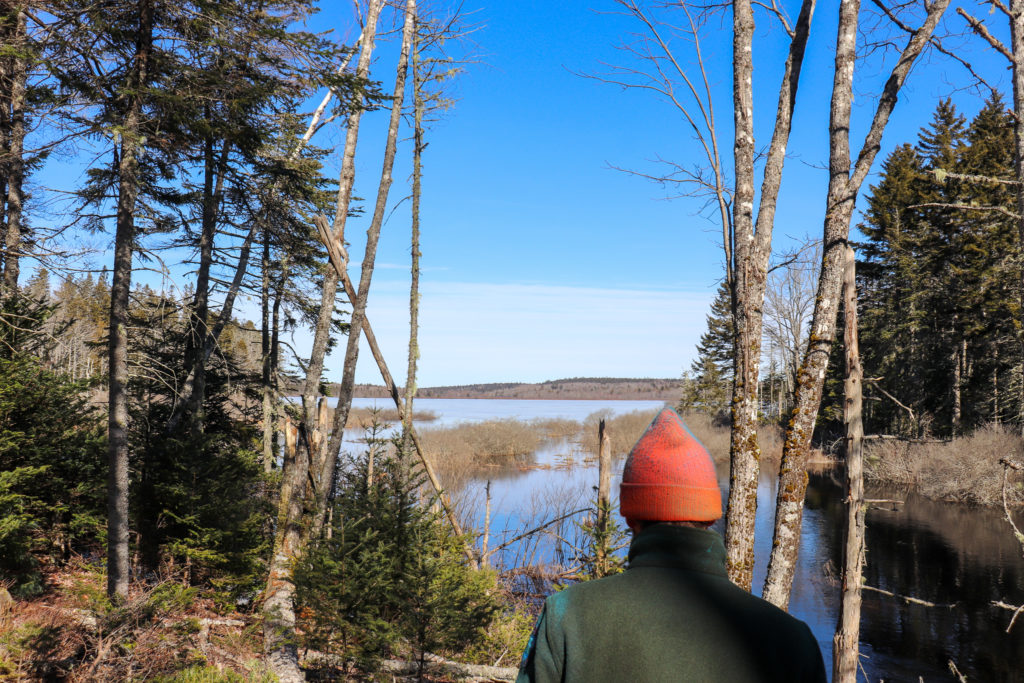 Many subthemes emerged within the primary theme of climate change throughout the series. Each site highlighted the impacts and disturbances such as windthrow, insects and diseases, and other climate-related impacts that influence management decisions. Wildlife also emerged as a key theme throughout the series. Changing forest conditions change how wildlife use the forest, and forest connectivity is essential for providing forest corridors for all types of wildlife. Finally, each session specifically focused on communicating with landowners about climate change. MFS District Foresters joined each panel and field tour to discuss their experience talking with landowners who have climate change on their minds. Engaging landowners is critical to addressing climate change in Maine’s forests at a scale that makes a difference.

USFS Research Forester, Laura Kenefic, posed the most important consideration during the first session: “The treatments we visit have varying carbon storage, adaptation, and climate and market resilience outcomes. An approach that is good for one objective is not necessarily good for others. How do we balance these competing demands, and what are the tradeoffs?”

As it often is in forestry, the answer is: ‘it depends.’