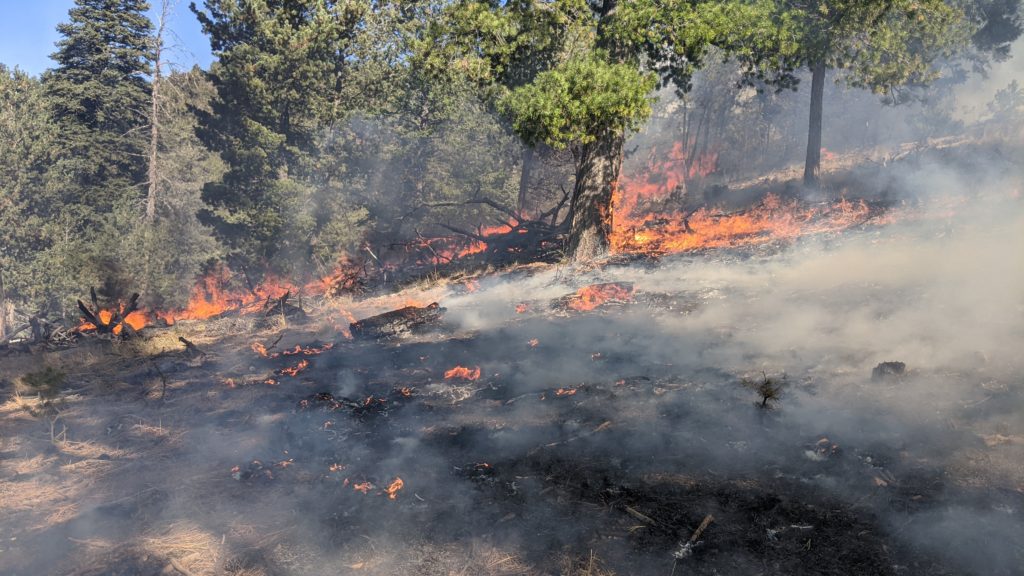 Some of the larger fuels igniting during the South Aztec burn.

On October 27th, I showed up to the South Aztec prescribed fire in the Santa Fe National Forest excited, a little nervous, and ready for a busy day of arduous work on my first prescribed fire. Partners from the Pueblo of Tesuque, the Forest Stewards Guild, Forest Stewards Youth Corps, Santa Fe County, and the City of Santa Fe Fire Department gathered early in the morning to discuss safety, logistics, and role assignments for the fire. As the morning progressed, the phrase “hurry up and wait” was used several times while the fire managers conducted phone calls, weather monitoring, and a test burn to confirm that conditions were right to begin the prescribed fire. 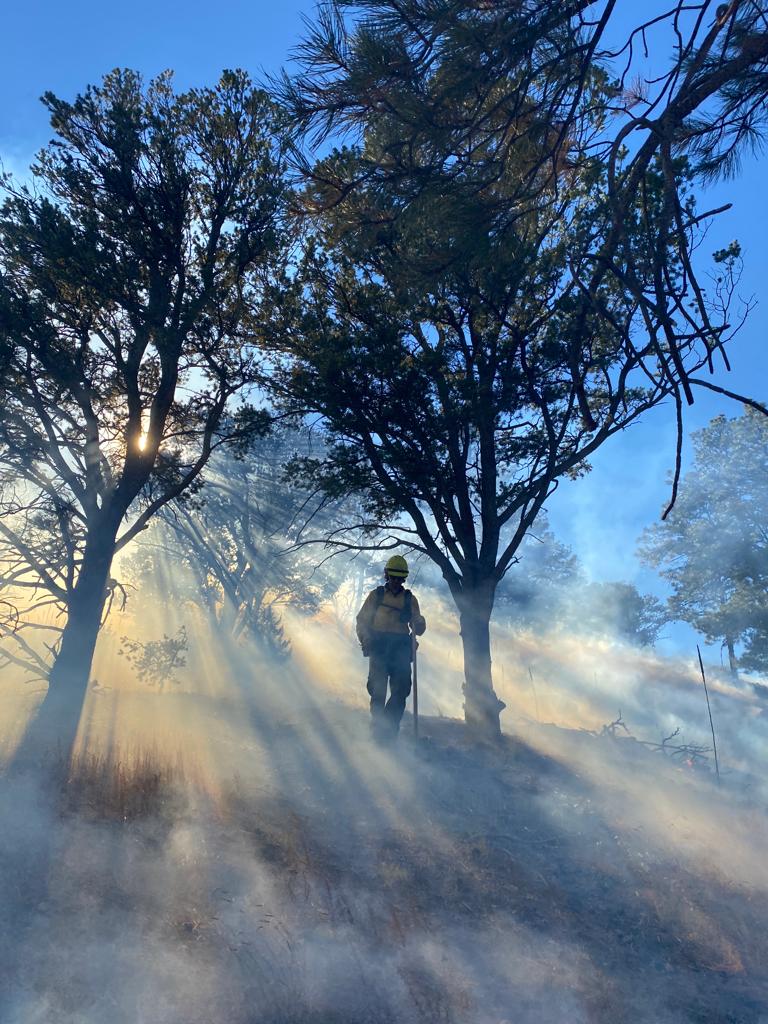 Forest Stewards Guild Fire and Fuels Manager Sam Berry inspects the holding line to make sure no embers travel outside of the burn unit area.

Prescribed burns, especially those that occur close to communities and high-value resources like the South Aztec burn unit, require a tremendous amount of planning and coordination. When a burn plan is written, a prescription is developed that sets ranges for environmental and weather conditions that must be met for the burn to take place. In preparation for a burn, personnel must retrieve weather forecasts, set up smoke monitors, put up signs, notify the public via news releases, identify any archeological or historical sites, identify threatened or endangered species, involve dispatch support, prepare the control line, coordinate with partners, and more. Due to this fire’s proximity to Santa Fe, the Forest Service worked closely with the NM Environmental Department’s Air Quality Bureau and the New Mexico Department of Health, holding calls before, during and after the fire.

The South Aztec prescribed fire was particularly high profile, not only because it was visible from the City of Santa Fe and surrounding communities, but it also occurred within the Santa Fe Municipal Watershed, where approximately 40% of the city’s water comes from. Seeing a popular campground in the Santa Fe National Forest filled with fire trucks and personnel in wildland firefighting gear was my first reminder of how important this treatment would be in protecting the forest and water resources that so many New Mexicans rely on and cherish. An even more blatant reminder of the importance of this fire would come later in the day when I summited a hill and could see Nichols Reservoir directly below us and the City of Santa Fe in the near distance.

My job on this prescribed fire, along with about a dozen others, was to hold the fire line. This means walking the fire line, a path that has been cleared down to the mineral soil surrounding the burn unit, looking for any spot fires or “slop-over” that may have occurred from the wind picking up and carrying embers. The burn unit had been previously thinned to reduce fuel loads and was adjacent to several other units that have been treated in the past few years. During prescribed fires, hourly weather readings are taken on-site to make sure that conditions are still within the prescribed ranges. If the weather moves outside of prescribed ranges, i.e., winds grow stronger than allowed in the plan, the burning is halted, or contingency plans are enacted. Although the wind picked up throughout the day on the South Aztec burn, concerning some members of the public, the wind never exceeded the appropriate ranges determined by the prescription.

Standing on the windward side of the holding line meant that I was in the thick of the smoke.  Although the wind conditions were partly to blame for the barrage of smoke, the wind was a key part of the success of the burn, blowing smoke and embers into units that had already treated, effectively creating safer prescribed fire conditions and a manageable fireline for holding. Per the prescription parameters, the winds kept the smoke away from the largest community in the area and kept it from moving into sensitive areas such as schools, hospitals, highways, and airports.

Smoke from the South Aztec prescribe burn travelling to the southeast of the watershed, away from the city of Santa Fe (visible on the right).

Historic wildfire suppression and a lack of previous treatments in a fire-adapted ecosystem like the Santa Fe National Forest has left the landscape within this watershed vulnerable to catastrophic wildfire. If wildfires were to occur in the watershed during the typical summer season, nearly 81% of the forest would be subject to high-severity crown fire, and the effects from the smoke would be much worse. Intense wildfire within the watershed would cause debris flows which could compromise the drinking water and lead to a dam breach, putting the city of Santa Fe at risk for severe flooding. Thinning and burning projects within the watershed are critical to reduce the risk of catastrophic fire and protect our municipal water source.

The diligent planning, highly trained and experienced personnel, and optimal weather conditions all aligned to make this burn successful in achieving its objectives to “reduce the risk of a high-severity crown fire, to protect the municipal water supply and restore sustainable watershed conditions… [and to] increase herbaceous ground cover to improve long-term soil stability and vegetative diversity.” Although the experience was a challenging one, I gained insight into the amount of coordination and logistics it takes to pull off a successful prescribed fire and a newfound respect for fire personnel and the work they do to protect our natural resources and communities. The South Aztec Prescribed Burn demonstrated the important role of the collaborative burn partnerships in protecting the forests and the human communities that depend upon it.