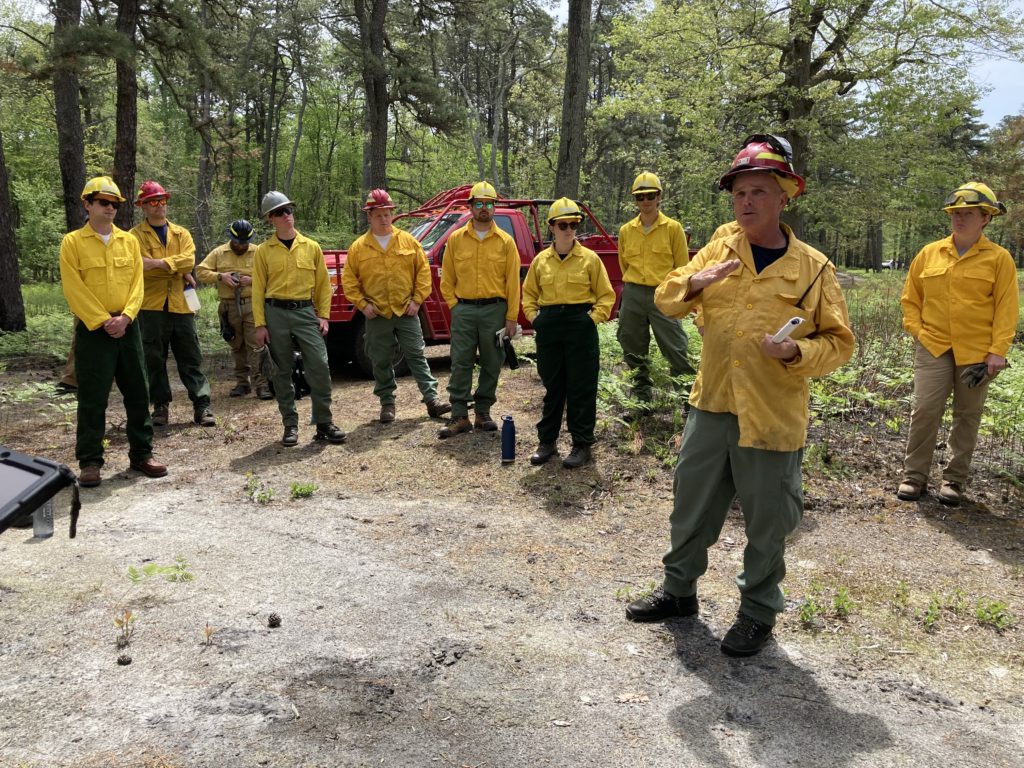 In the New Jersey Pine Barrens, “putting the forest first” means prescribed fire. Supporting fire science production and application in the North Atlantic requires both serving the community that already exists and investing in future scientists, managers, and practitioners. The North Atlantic Fire Science Exchange recently organized a week-long Fire Camp with the New Jersey Forest Fire Service and USDA Forest Service. This action-packed week brought together professors and students from Penn State, Arcadia University, Rutgers University, Stockton University, Rowan University, the University of Maine, and the Yale Forestry School. These academics were joined by fire wardens, fire tower observers, science technicians, wildlife biologists, and others from the organizing agencies and New Jersey Audubon. The group spent the week visiting field sites, implementing prescribed fire, and developing professional connections. Students and organizers alike deepened their understanding of fire science in ways that will influence their careers in both the short- and the long-term. As one student said: “This week has given my career a whole new direction. I didn’t realize that I could do [my focus area] and fire; I thought I had to do one or the other. After meeting [fire science professionals], I won’t say it’s a 180 but it’s opened up a whole new world.” 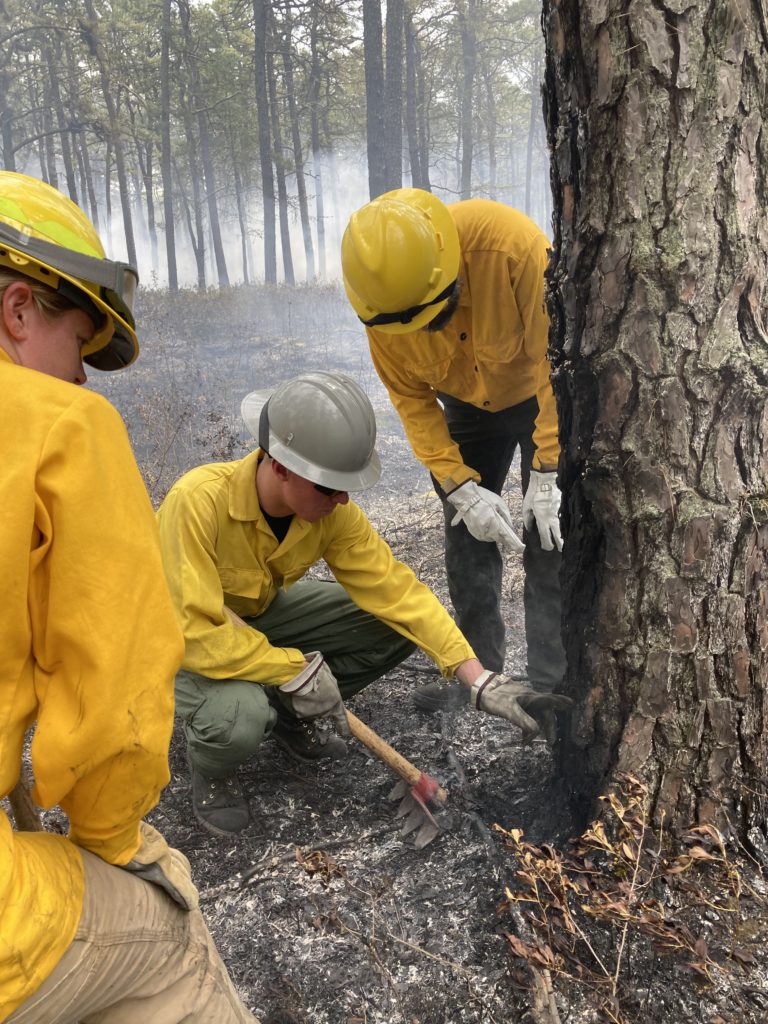 Monday, May 16 began with the FFT2-qualifier field day. Our students joined dozens of other newly-trained wildland firefighters to learn about PPE, hand tools, engines, and drip torches. Our group spent the afternoon examining fire history at our base at the YMCA Camp of the Pines, which actively uses NRCS funding to support New Jersey Forest Fire Service prescribed fire operations on camp property. We were introduced to the superpowers of pitch pine, which include serotiny and an unbelievable ability to resprout after fire. We looked at trees’ fire scars, examined ecological effects of recent prescribed fire treatments, and introduced the driving question behind prescribed fire: “What’s the objective?”

Tuesday, May 17 was a full field trip day. We visited a carbon flux tower and learned about fire-caused carbon release in a morning visit to Silas Little Experimental Forest. (Prescribed fires generally release less carbon, though wildfires in treated areas may not release as much carbon as wildfires in untreated areas. Just as in forestry, it depends!) The students then had a lesson in fuel consumption while implementing a small prescribed burn in a plantation. Our visit to Silas Little also included an introduction to tick population census methods and a discussion with the authors of a new research paper that proposes a paradigm shift in tick management by focusing on fire-adapted ecosystem restoration.

After a picnic lunch, we continued our field tour at the Warren Grove bombing range. While fighter jets circled overhead, we stood at a vista of much of the Range property to get acquainted with the Range’s burn plan and treatment blocks. We also discussed the role of fire in maintaining populations of broom crowberry (a plant that resembles neither broom, nor crow, nor berry, and is native only to frequently burned landscapes). Down the road from the bombing range, we visited a recent prescribed fire adjacent to the gun range. The burn boss from that operation described the weather conditions and tactics used to reduce hazardous fuels in this challenging burn unit. Then we crossed the street and heard perspectives on the challenges of burning to achieve two conflicting objectives: rare plant maintenance and firefighter safety. 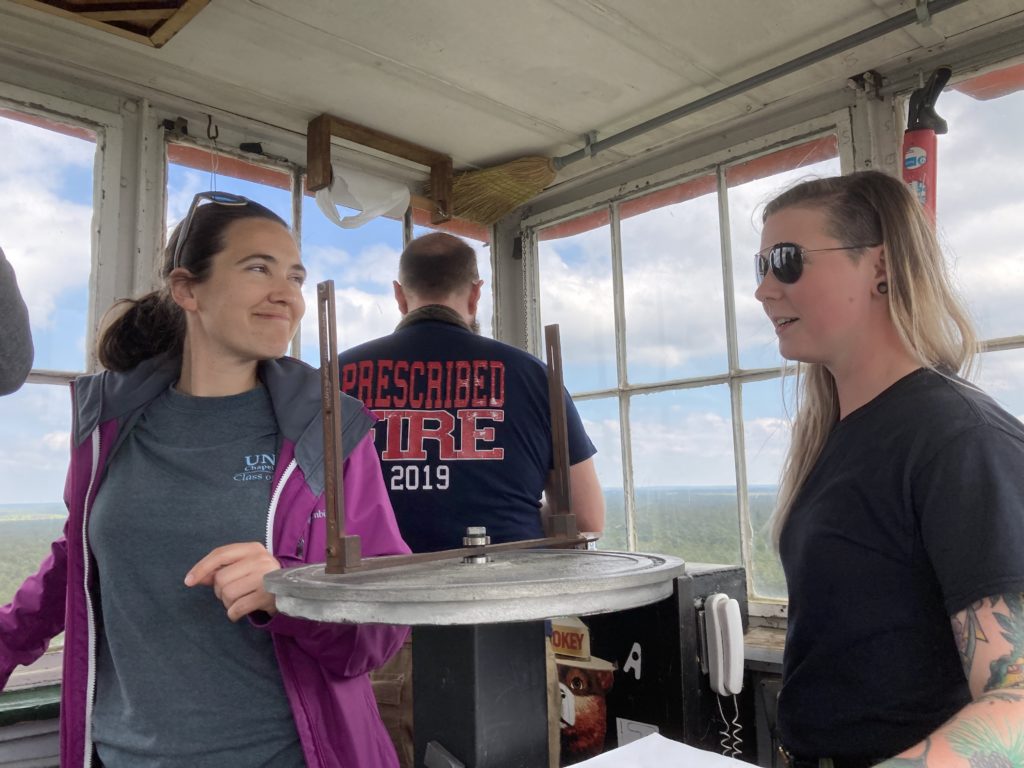 Our final stop was a snake den site managed in partnership with NJ DEP and NJ Audubon. The northern pine snake makes its home in human-made, burrow-like mounds in an area maintained by prescribed fire and mowing. A student spotted a pine snake crossing the road during our visit, so the group was afforded an up-close look at this threatened species in its habitat.

Wednesday, May 18 was the stuff of legends. Our Fire Camp group met up with NJ Forest Fire Service personnel plus two rock star researchers from the USDA Forest Service Southern Research Station for a day of prescribed burning. While the researchers set up instruments with a handful of students, the rest of the group received a personalized historical tour of Quoexin Cranberry Farm, fondly nicknamed “Small Timbers” for the fire operations and research that take place there. Landowner and third-generation fire warden and cranberry farmer Tom Gerber uses prescribed fire and mechanical treatments to protect his cranberry bogs. Tom graciously guided our group to light up a total of three burn units. Our students were assigned to holding and firing squads and gained valuable experience with the tools of the trade (which in New Jersey’s cranberry bogs includes buckets). Everyone at the farm that day learned something, including a seasoned professor who saw fire effects playing out in real time and a prescribed burn veteran who supervised a squad of new recruits. We finished the day smiling over ice pops at our after-action review and then laughing over several servings of s’mores around the campfire that night. 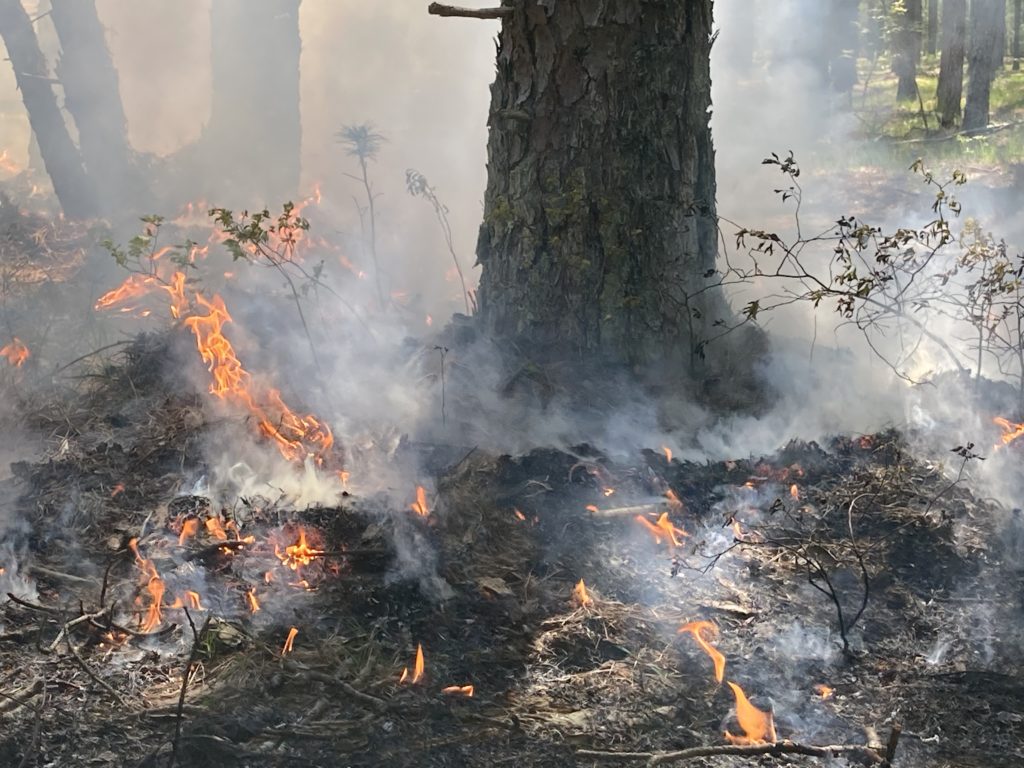 Thursday, May 19, our group compared effects from a wildfire and from a prescribed burn designed to mimic catastrophic wildfire. We heard accounts of the May 1, 2022 wildfire from the first fire tower observer to spot its smoke, and from drivers of the first engines on the scene. We also got to explore how other treatments on the property influence forest ecology, including controlling invasive plants. In the afternoon, we visited a prescribed burn with objectives of mimicking fire effects from a wildfire. The fire managers responsible for planning, setting, and controlling the wildfire-like prescribed burn then walked us through the risks and rewards of setting such a fire. Later, we climbed a firetower for a unique view of the NJ Pine Barrens. We learned about firetower operations and how agencies such as the NJ Forest Fire Service and USDA Forest Service fit into the Incident Command System on large-scale fires outside of the state. Students directly connected their controlled burn activities the day before to after-burn effects in the forests they visited on Thursday. Their observations and questions about forests burned by wildfire v. prescribed fire were more insightful and mature as a result. Thursday’s formal program ended with ice cream and a lively group reflection session.

Our final day, Friday, May 20, was a hot one, so we wound down our week with some low-intensity activities. The morning began at the camp with an introduction to when Brown’s transects, photo plots, and LiDAR may best be pulled out of a fuels measurement toolbasket. Adjacent to the camp, we learned about working with neighbors to protect homes in the wildland-urban interface. We visited historical Atsion, NJ and got a personal historical tour of land management and wildfire response for that heavily-burned piece of ground.

Our group had one final meal together, then said our thanks and goodbyes with plans to stay connected and bring home lessons learned.

The NAFSE leadership team is still processing all the benefits that came out of this week. We hope that we can replicate this event and expand access to more fire students and emerging professionals. Ultimately, it is these experiences that move the needle towards safe and resilient fire-adapted landscapes and communities.

Amanda Mahaffey, deputy director at the Forest Stewards Guild, is a member of the NAFSE leadership team.