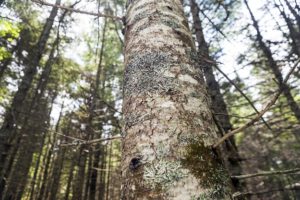 Foresters will often respond to a question about the woods with the answer, “It depends.” And they are right. Forests are flexible, and the answer to most questions depends on the landowner’s goals, on the state of the forest, the species mix, the slope of the site, the soils, the elevation, the aspect, or even the landscape context. So when society asks how much of a difference New England forests can make in the fight against climate change, foresters might be inclined to answer, “It depends.” But this answer is not sufficient for effective policy planning. Unless we articulate a positive and precise vision for how outstanding forest management can help forests play a role in solving the climate crisis, then the societal forces that argue that the best way to halt climate change is to stop harvesting completely may ultimately win the day.

New England Forestry Foundation will soon provide a straightforward answer to the question. Its report, “A New Climate Wedge,” to be published later this fall, already articulates how much additional carbon can be sequestered in living forests via the application of Exemplary Forestry™, which is then available for capture through harvesting and manufacture of long-lived forest products. The result could be a new approach to reducing the effects of climate change. 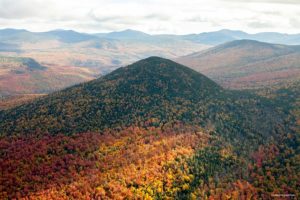 How significant is the benefit? Pretty big. Exemplary Forestry could sequester as much additional carbon in the forests of New England as will be emitted over the next 20 years by all the cars and trucks in New England. Wood buildings have the potential to sequester even more, and to simultaneously reduce emissions through avoiding the energy used and subsequent carbon pollution in steel forges and concrete kilns and by fostering more compact development patterns. A 2014 study led by Yale researchers estimated that without cutting more than growth wood buildings could cut global carbon emissions by 14 to 31 percent; NEFF and partners are working toward a New England estimate. These approaches to using forests to protect our climate were detailed in a New York Times op-ed published by leaders from New England Forestry Foundation, Harvard Forest, Highstead Foundation, and Brandeis University in the New York Times on October 3, 2019. 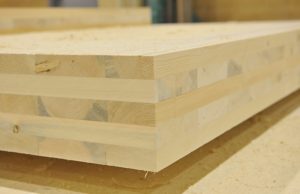 That op-ed articulated a three-part approach to averting climate change: “protect forests from development, improve forest management, and use sustainably harvested wood to build tall wood buildings.” New England Forestry Foundation’s coauthors are leaders of the Harvard Forest’s Wildlands and Woodlands vision, which aims to stop the exurban residential sprawl that has eaten 850,000 acres of New England forest since 1985, and will eat another 1.2 million absent a change in our development patterns. Wood buildings could be a key component of that new approach. This is because mass timber buildings, using new technologies like cross-laminated timber, can be taller than traditional stud-wall construction, while still being more economical in the mid-rise space than steel and concrete buildings. Properties like the Rhode Island School of Design’s new six-story dormitory or even taller buildings like the 18-story Mjosa tower in Brumunddal, Norway, could enable denser development, keeping forests, and their economic, ecological, and carbon benefits intact.