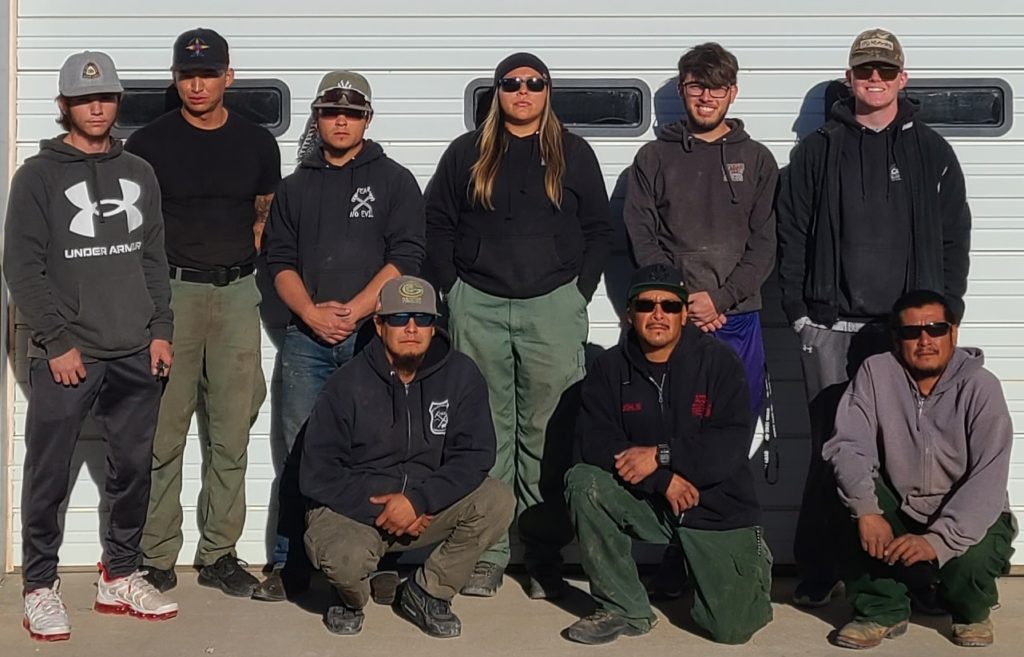 On a sunny Wednesday morning this past October, the Mt. Taylor Fire & Fuels Crew stood around a rather lethargic test fire, waiting for the sun to climb higher and dry things out. The ten-person crew was there to support the Copperton prescribed burn on the U.S. Forest Service’s Mt. Taylor Ranger District. The burn had already been delayed two days due to precipitation over the weekend, and fuel moisture was still high, but on this day they were able to move forward with the restoration effort.

Along with Mt. Taylor fire personnel and several Forest Stewards Guild staff members, the bulk of the numbers on hand that day came from the Guild’s Fire & Fuels Crew. The ten crew members hailed from the communities local to New Mexico’s Cibola National Forest including San Fidel, Pueblo of Acoma, Albuquerque, Grants, Gallup, and Milan, and spanned beginners to seasoned wildland firefighters. What they had in common was having worked as seasonal “ADs” (administratively determined temporary employees), working in wildfire suppression for the Forest Service, before being hired by the Guild to support fall prescribed fire efforts on the district.

A timber-marking crew member puts a dot of paint on a “leave” tree.

With funding from our Collaborative Forest Restoration Project (CFRP) in the Zuni Mountains landscape, the Guild took an opportunity to contribute capacity to forest restoration and prescribed fire efforts at a moment in the season when Forest Service seasonal employees are typically laid off. Collaborating with the Cibola National Forest’s Mt. Taylor Ranger District, we hired two seasonal crews—a four-person timber marking crew in addition to the fire and fuels crew—to provide an extended season and extra jobs training to local young people and professionals.

In so much of what we do at the Guild, training the next generation of forest stewards is paramount. Since the 1990s, high school-aged young people in northern New Mexico have participated in the Forest Stewards Youth Corps (FSYC) summer jobs program, building early-career skills in forestry and natural resource management. In recent years, the Guild’s southwest office has turned increased attention to older youth and the need for stepping-stone opportunities into professional positions. The fall FSYC program, for example, now provides opportunities for 18- to 25-year-olds to build wildland fire skills, while our new Forest Stewards Mentorship Program offers the chance for FSYC alumni to work more closely with Guild staff members, gaining exposure to a variety of program areas and professional skills. The two seasonal Mt. Taylor crews represented another effort to provide skills, training, and job experience to local adults and youth interested in forestry and wildland fire, while also bringing needed capacity for work on the ground.

From July to October, the timber marking crew painted roughly 630 acres of forest in need of restoration thinning treatments. Two of the four crew members are alumni of the FSYC program, and it was satisfying to see them working alongside adult colleagues, applying forestry skills in a land-management context. Mt. Taylor personnel who worked with them spoke highly of the quality of the marking they accomplished, and the district later made the decision to hire for a couple of timber marking seasonal positions to continue the crew’s good work.

After the Copperton Rx burn, the fire & fuels crew went on to participate in several other burns, in a couple of cases providing the critical mass for the operations to be able to happen. When they weren’t out burning, they contributed miles of hand line, prepped acres for burning, and even traveled to two neighboring Forest Service districts to support their prescribed fire efforts. Having the two seasonal crews was a successful collaborative experience between the Guild and our Cibola National Forest partners, and we hope to explore similar initiatives in the future, in the Zuni Mountains landscape of New Mexico and beyond.