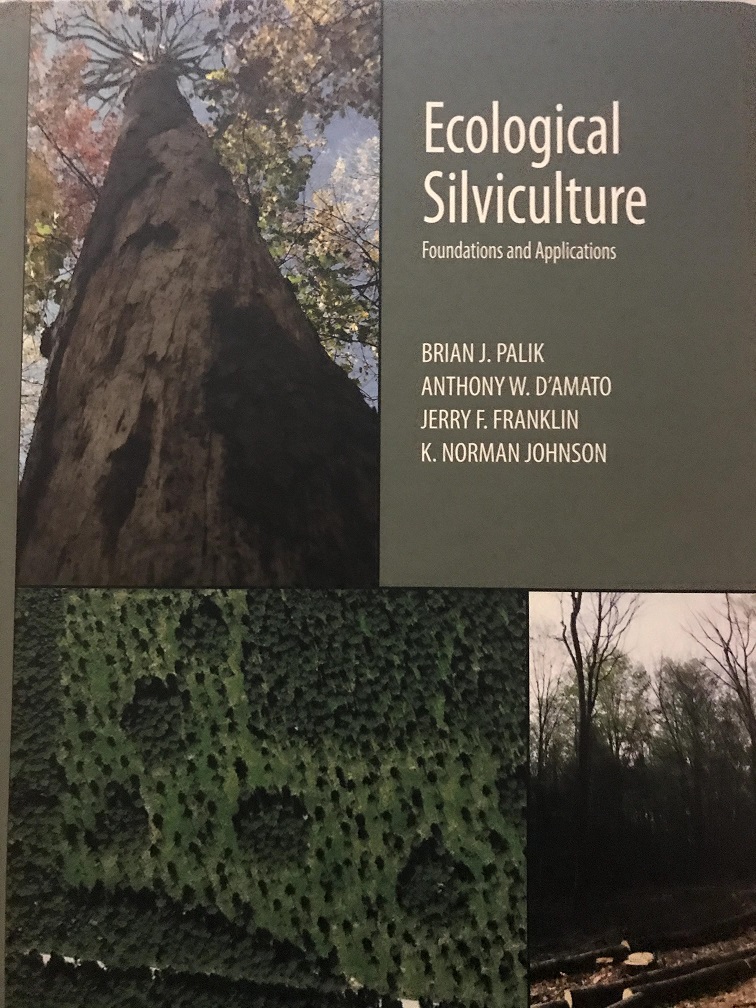 In the early days of the Forest Stewards Guild, silviculture was largely seen as a means of maximizing timber production. Today, a new textbook captures the tenets long upheld by Guild members and provides a comprehensive, scientific reference for justifying the holistic approach we take in our work. Furthermore, this text addresses ecological silviculture in the context of today’s world of climate change and an ever-shifting forest policy landscape. Ecological Silviculture: Foundations and Applications is a worthwhile read for foresters of today and tomorrow.

The authors are familiar names in Guild circles: Brian Palik, USDA Forest Service Northern Research Station; Tony D’Amato, University of Vermont; Jerry Franklin, University of Washington; and Norm Johnson, Oregon State University. This is no coincidence. “Over the couple of decades, the Guild and its members have led the way in demonstrating the feasibility of these approaches for satisfying those traditional objectives, while also generating a wider range of ecological and societal benefits,” says Tony D’Amato. “A big part of the inspiration for this book was observing the work of Guild members and others who have been demonstrating that these concepts can be realized in practice.”

The book is rich with thoughtful silvicultural approaches and photos from well-managed forests across the country, including examples from Guild foresters. For instance, a box in chapter 8 features management for structural heterogeneity in northern hardwoods in Aitkin County, Minnesota, the stomping grounds of Guild member Mark Jacobs. Readers at work in forests from New Mexico, to Washington, to Maine, to Florida will find inspiration in the forest systems and treatments described in the text. The words in Ecological Silviculture will resonate with Guild members everywhere, regardless of your native forest type.

Spoiler alert! Remarkably, this text reframes the familiar. Ecological forestry principles are founded in traditional silviculture, i.e. regeneration methods. However, rather than simply adding a layer of ecological objectives to classical treatments, Ecological Silviculture deliberately changes the language we use. Ecological silvicultural systems are centered on the natural disturbance being mimicked by treatment, e.g. gap disturbance in northern hardwoods. Throughout the book, the authors emphasize that this approach is not exclusive of timber values. Reframing silviculture through an ecological lens captures the whole system, including the economic importance to forest-dependent communities. 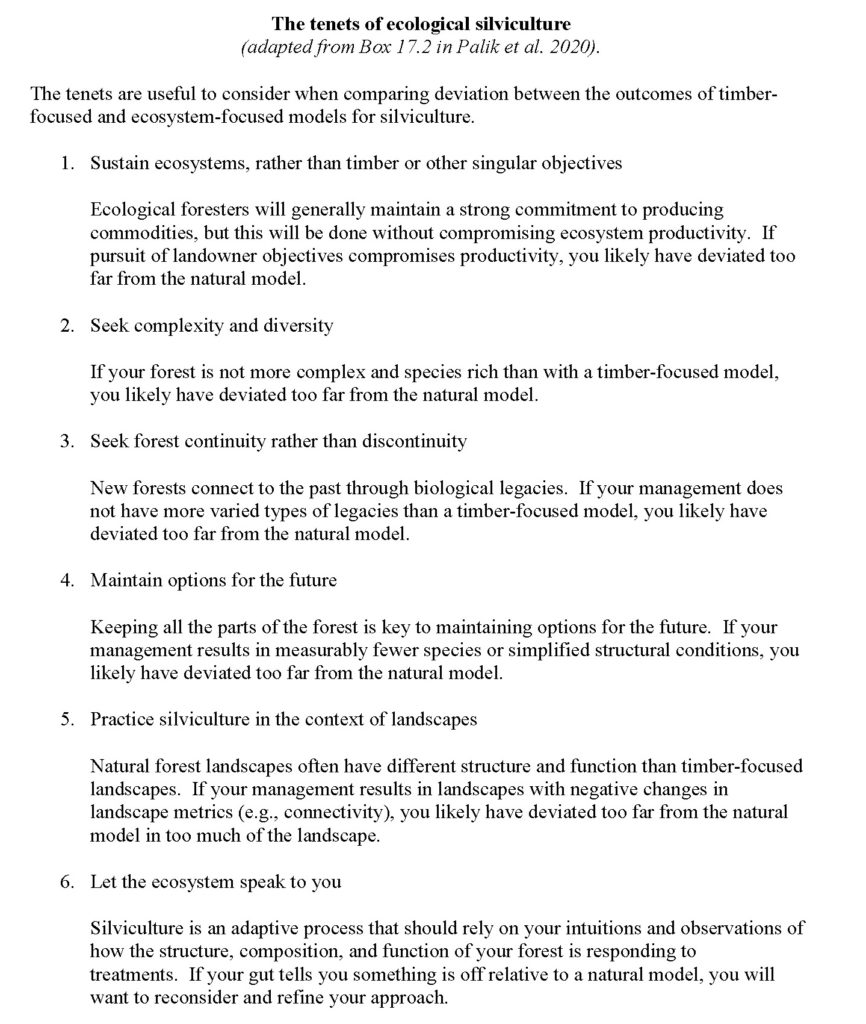 Brian Palik wanted to highlight (right) for Guild members the list of Tenets of Ecological Silviculture presented in chapter 1 and revisited in chapter 17. “I would suspect that many Guild foresters would read this and say…yep I try to do that…” he says, “But hopefully the book gives them more of the tools they need to achieve these objectives.”

The publication of this book aligns with the milestone of the Guild’s 25th anniversary as a membership organization, and we can look to it for inspiration for the next 25 years of forest stewardship. As the authors conclude, “In fact, the greatest gains in silviculture are made through its practice by creative foresters and we are excited to learn of the insights and ideas developed over time from the wider application of the principles and practices presented in this text.”

Stay tuned for a webinar the Guild will host with the authors in December, to share more about the book and its content and engage in discussion!

Ecological Silviculture: Foundations and Applications is published by Waveland Press. The authors are donating royalties from the book to the Guild to help further our ecological forestry programming.