Guild events in the Pacific Northwest have begun to pop up all over the calendar, with the piquant insistence of a small flycatcher hailing a taxi.*  From the Bogs and Outwash Guild Gathering in Shelton, Washington last fall to recent and upcoming Foresters for the Birds demonstrations near Portland and Corvallis, Oregon, the Guild has been building partnerships and providing a space for conversation across the region.

In a stand of mature Douglas fir, Western hemlock, and Western red cedar, a sibilant song whistles through the canopy, a song whose cadence and context inspire the mnemonic “trees-trees-beautiful-trees.”  This Brown Creeper is a small bark-gleaning bird that nests under the sloughing bark of dying trees and snags in mature conifer forests, and is the type of bird that is easy to identify, is reliably associated with particular forest types and structural characteristics, and for whom the Pacific Northwest is a core part of the species range. 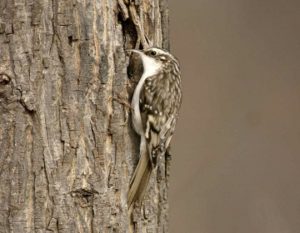 The Foresters for the Birds program in the Pacific Northwest is modeled on the silviculture-centered programs that originated in the northeastern U.S. a decade ago in response to declining populations of songbirds, abundant privately-held forest, and opportunity for increasing forest stewardship. The program provides a framework for partnering private landowners, foresters, and avian conservation groups for the purpose of generating an appreciation for regional avifauna, and the ways that a managed landscape can better support bird life.

At our most recent workshop, held in early May in conjunction with West Multnomah Soil and Water Conservation District, a spectrum of participants including landowners, government agencies, soil and water conservation districts, contract foresters, and ornithologists had a chance to test-drive some of the practical aspects of the program. This northwestern version of Foresters for the Birds reflects the characteristics and history of northwestern forests. By synthesizing current research and management practices into a flexible set of recommendations and trainings, we provide a resource that consolidates information and is supportive of landowner values. 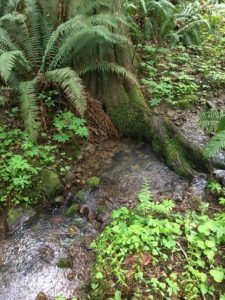 Another gathering will be held at the end of the month (May 31) at the McDonald-Dunn forest outside of Corvallis, Oregon with USGS biologist Dr. Joan Hagar. In short, this new program is growing through the feedback of interested participants and community members. The program adds value to forests by reaching out to people who own, manage, and love forests and providing another way to see the benefits of sustainably managed forests through a bird-shaped lens.

Further north and farther down the trail, the Guild will be partnering with Jefferson Land Trust’s Owen Fairbank and Ecotrust to host a Guild Gathering at Chimacum Ridge on Washington’s Olympic Peninsula on September 13th. Mountains, rivers, forests, ocean, and birds converge in what promises to be a memorable step in the growth of the Guild in the Northwest. Stay tuned for registration info coming soon!

*The Pacific Slope Flycatcher, an associate of mature conifer forests in the Pacific northwest, is noted for a shrill “wolf-whistle” phrase in its song that has caught the imagination of urban birders in the noisier, more saliva-choc times before cell phones and Uber.

Written by Gregor Yanega.
Thank you to Maggie Smith, the Missouri Department of Conservation, Peter Hayes, and Gregor Yanega for the photos in this article.