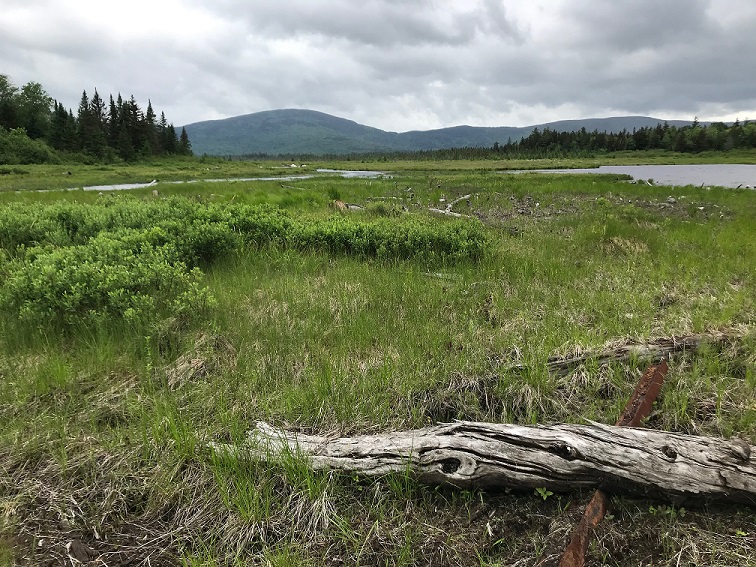 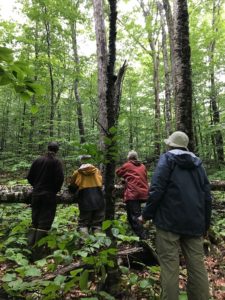 On August 15-16, 2019 the Appalachian Mountain Club (AMC) hosted over 20 members of the Forest Stewards Guild for a two-day tour of AMC’s Maine forest and land management operations. Attendees included representatives of state and federal agencies (Maine Forest Service, Maine Natural Areas Program, Baxter State Park, USDA Forest Service and U.S. Fish & Wildlife Service), land trusts and NGOs, as well as students and private consulting foresters. While most attendees were from Maine, others came from New Hampshire, Vermont, Massachusetts and even Missouri. AMC was represented by Steve Tatko, Dave Publicover, Walter Graff and Karin Bothwell as well as Ted Shina of Huber Resources Corporation. The group enjoyed the excellent hospitality of Gorman Chairback Camp during their stay, including s’mores and canoes.

Early arrivals on Thursday had the opportunity to take a hike through scenic Gulf Hagas. Thursday afternoon, the group travelled through the Chairback area, where we saw recent and pending culvert replacement projects and discussed AMC’s aquatic habitat connectivity work. We also looked at past harvesting on the north slope of the Chairback Range in high–quality hardwood stands and the use of harvesting to create glade skiing trails. After dinner on Thursday, Dave, Steve and Walter gave the group a presentation on the history of the MWI project (including our planned acquisition of the Pleasant River Headwaters Forest), our approach to land and forest management and the restoration of heavily harvested commercial forests, forest certification and our involvement with forest carbon offset markets, the development of recreational infrastructure on our land, and our involvement with local communities to promote regional ecotourism. 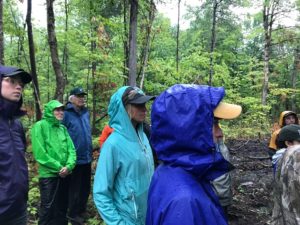 Friday morning began with a steady rain, but that did not deter this hardy group. We travelled to the southern part of the Katahdin Ironworks property, where we looked at current harvest operations and discussed AMC’s silvicultural approach and long-term goals. The group had a chance to talk to Alex and Molly London, the young husband-and-wife logging contractors who are in their first year working on AMC’s land. Lunch was at the Caribou Stream bridge at the outlet of Caribou Bog, where Steve talked about early logging history and the old village of Raystown, which existed for only a decade in the early 1900s. We then looked at two areas that were harvested last year, a beech salvage harvest in a low–quality stand and an initial commercial thinning in a young spruce-fir stand. Discussion at these stops had a strong wildlife focus with an explanation of how we were thinking about habitat management on our ownership for both forest birds and focal species such as American marten and Canada lynx. The group gave us some good thoughts about additional things we should be considering. 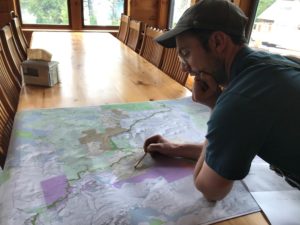 The day ended at the Katahdin Ironworks historic site where Steve once again demonstrated his extensive historical knowledge of the area (with a big shout out to the ladies at the Brownville Historical Society). During the wrap-up discussion, participants expressed their appreciation for our conservation and stewardship efforts – while many were aware AMC had a presence in the region, only a few were fully aware of the extent and complexity of the MWI project.

Many thanks to Steve Tatko of AMC and Barrie Brusila and Amanda Mahaffey of the Guild for pulling this tour together and for all who attended!